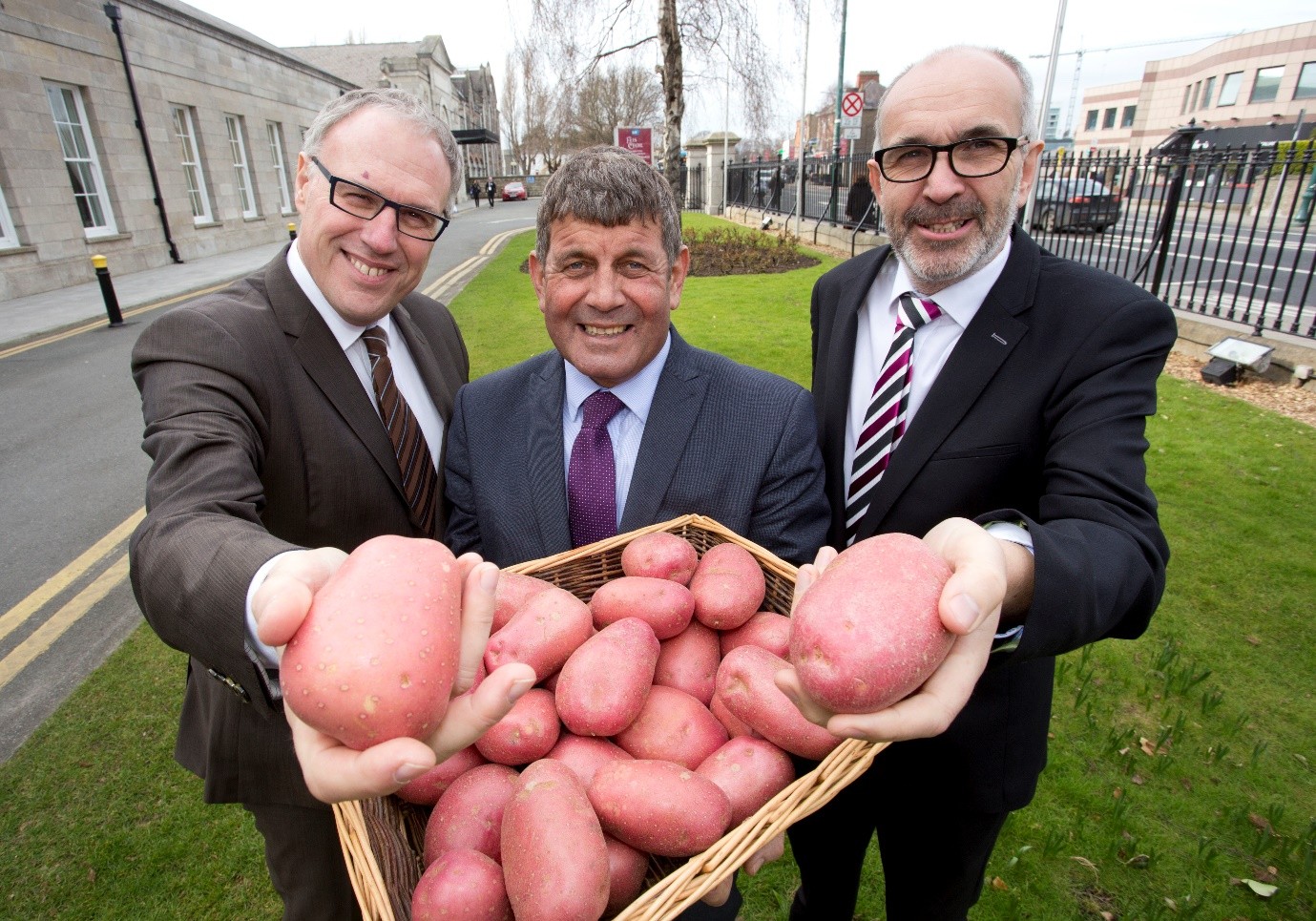 The Irish Potato Federation, with the support of the Department of Agriculture, Food and the Marine, Bord Bia, Fáilte Ireland and Teagasc has won the bid to host the World Potato Congress (WPC) in 2021 in Dublin.

At today’s launch in the RDS, Andrew Doyle T.D., Minister of State in the Department of Agriculture, Food and the Marine said: “I am delighted to be able to announce this good news for Ireland in the RDS, which will be the congress venue for the 2021 World Potato Congress. I want my Department and Bord Bia to continue to work with the Irish Potato Federation to make this event a great success for the Irish food industry.”

The President of the Irish Potato Federation, Michael Hoey, said: “Winning the World Potato Congress for Ireland is the culmination of a lot of hard and creative work by a very dedicated committee and I know that the 2021 Congress will shine a spotlight on the importance of the potato in Ireland and across the globe and become a centrepiece of world-class marketing excellence.”

The President and CEO of World Potato Congress Inc., Romain Cools, said: “Ireland has a very important historical and cultural connection with the potato going back hundreds of years. I see the 2021 Congress looking at the important role the potato will play in the future as a sustainable source for food security across the world. The World Potato Congress in Dublin will be the perfect follow up to this year’s congress which will be held in May 2018 in Cuzco, Peru, under the title: ‘Biodiversity, food security and business’. I will be working closely with the Irish Potato Federation over the coming years and really look forward to visiting Dublin in 2021 for the Congress.”

Paul Mockler, Head of Commercial Development in Fáilte Ireland said: “We have been working with the Irish Potato Federation since 2015 on this conference which illustrates the hard work and advance pitching necessary to successfully win such events. Fáilte Ireland is delighted that the Irish Potato Federation was able to secure this conference for Dublin in 2021. The work and dedication of the local Organising Committee, supported by our own Dublin Convention Bureau, delivers a real economic benefit to this country, with this event alone worth €1.7 million.”

It is envisaged that 1,000 delegates, from developing and developed countries across the globe, including growers, researchers, producers, traders, processors and manufacturers, will attend the Congress. The Irish Potato Federation has also secured the simultaneous hosting of the Europatat Congress, which is the annual congress of the European association of the potato trade. Both events will become a week-long focus on the potato, the third most important food crop in terms of global consumption.

Today Ireland is widely known as The Food Island, producing food to the highest standard which is exported around the world and Ireland is setting new standards in terms of food innovation. With a long tradition of involvement in agriculture dating back to the 18th century, the RDS, Ballsbridge, will be a fitting venue for the WPC and Europatat conference in 2021. The RDS was established in 1731 and is one of world’s oldest philanthropic organisations. The RDS is dedicated to seeing Ireland thrive both culturally and economically and works to see this happen through science, the arts, agriculture, enterprise and equestrianism. This ethos mirrors the aim of the Irish Potato Federation for 2021 when it will analyse and explore “The Changing World of the Potato.”